The striking art featured in a Long Island City elevator 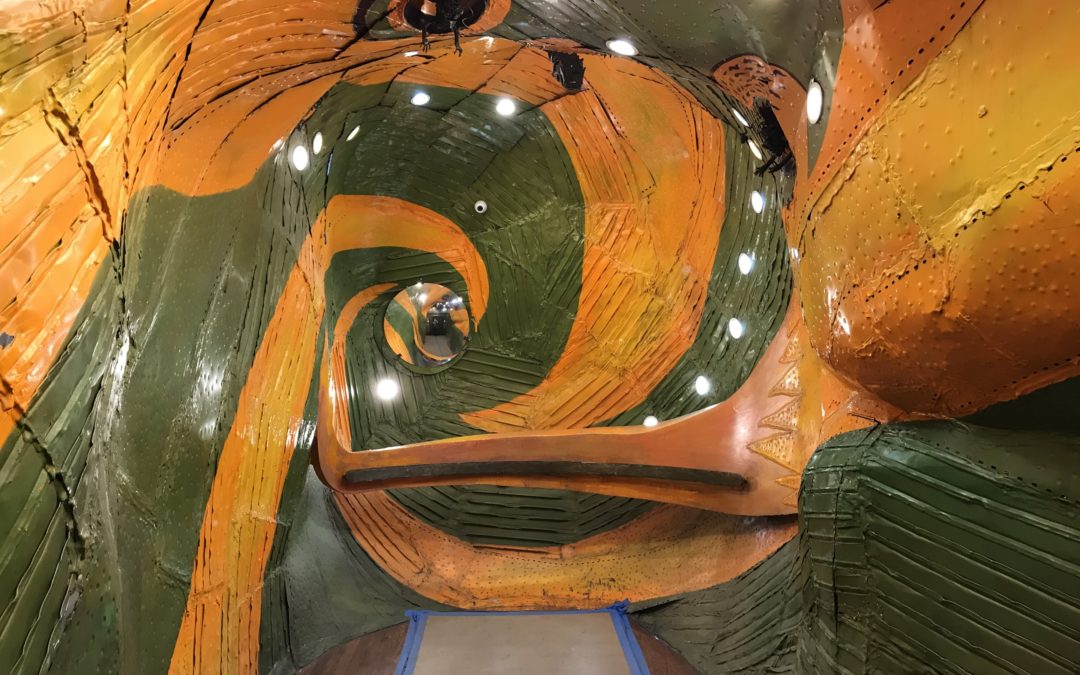 Hidden at the back of a cavernous lobby in a plain office building in Long Island City sits an elevator that is anything but ordinary. That is because of the eye-popping art inside, including bright green and orange swirling paint and small metal sculpture head that juts out of the walls.

Created in a building called The Factory in the early 1990s by three artists, Johnny Swing, J.J. Veronis and John Carter, the elevator art is not just for the building’s employees. It’s also open to the public. It even attracts its own visitors.

“People from outside come back here all the time,” says building security guard Earl James, who noted that, while shops in the lobby close on weekends, the elevator is kept open for visitors.

James says the elevator attracts about three to five people each day, usually New Yorkers who learned about the elevator. Sometimes tourists visit too. He added that the building’s new employees sometimes bring friends to come see it. 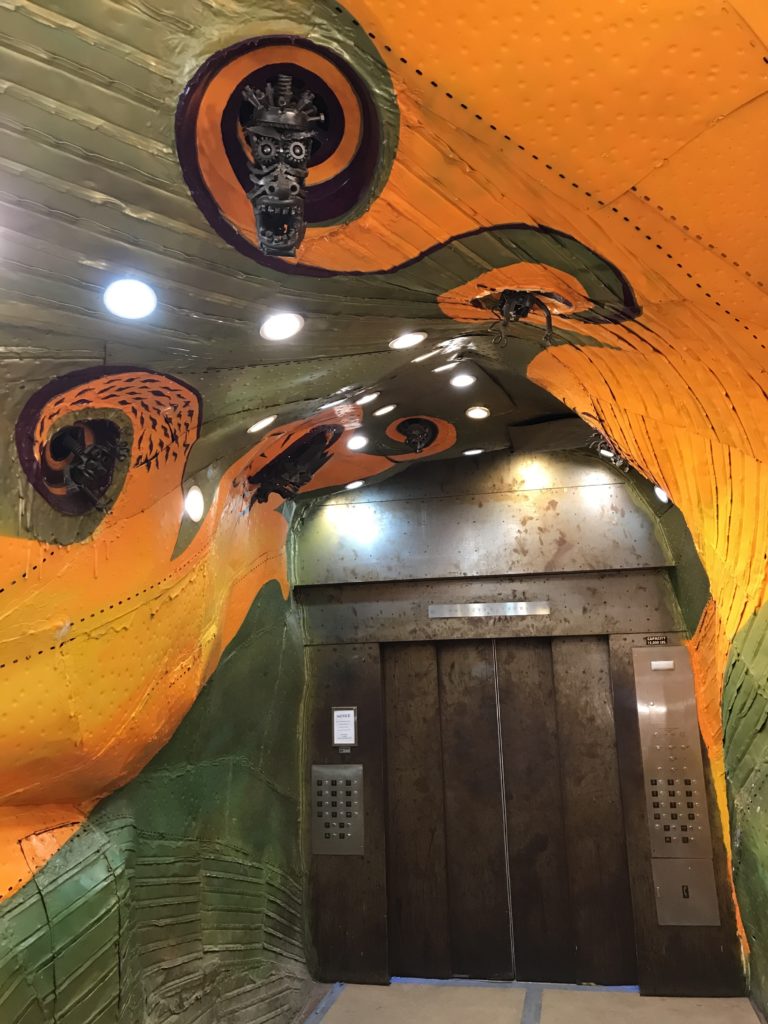 The elevator art was created within two weeks. Photo by Gabe Herman.

Stephen Lamberton, who works in the 10-story building, says the wonder of the elevator art does wear off eventually. “When people first see it they’re amazed, like, wow,” he says. “But then it’s no big deal, just part of the routine.”

The elevator is the size of a freight elevator, about 20-feet-deep with a 10-to-15-foot-long undulating ceiling. Its art was the first stage in a larger project in the building done from 1991-93 by Swing, Veronis and Carter, who worked together in the 1980s and ‘90s and were known as the “Three J’s,” often using found metal objects in their work, according to Veronis.

The overall project in The Factory involved artwork throughout the lobby’s 18,000 square-foot hallways. It was all done in a similar fantastical style as the elevator art, which the artists created first. Veronis says the work in the elevator “started to morph into a womb, or the inside of your head,” adding that it “gestated our ideas and spilled out of the elevator, up out into the lobby.”

Veronis says the outside of the elevator had a “circus-like façade,” featuring panels with kinetic spinning figurines. The lobby art included mosaic art on the floor and walls, and themes related to the environment, outer space and education. According to James, the lobby art included “faces hanging down from the ceiling.” Most of the art was eventually removed by later building owners. The lobby’s walls are now covered with plain white paint.

Veronis describes creating the elevator art at a “frenetic pace” over the course of 10-14 days, during which they practically lived in the space. “We didn’t have a concrete plan, just started attacking,” he says of their approach. “That was the brilliance, genius of it.”

Swing has similar memories of the elevator work, saying it was the “peculiar result of three people in charge, therefore nobody in charge.”

The building owner decided in 1994 to remove the artwork, which the three artists fought by going to court and claiming it was protected by the recently passed Visual Artists Rights Act. They eventually lost on appeal when the court ruled that the art was made for hire and therefore not protected, after which the building was sold to new owners who also wanted to remove the work.

Veronis got permission to take down much of the art himself, which he re-used in other pieces. The elevator art, however, was allowed to stay, along with one other nearby piece which features a big metal arm reaching towards an upside down school bus. The work uses real parts of a bus and Veronis says it represents the turmoil and low standards of the education system in the early 1990s. 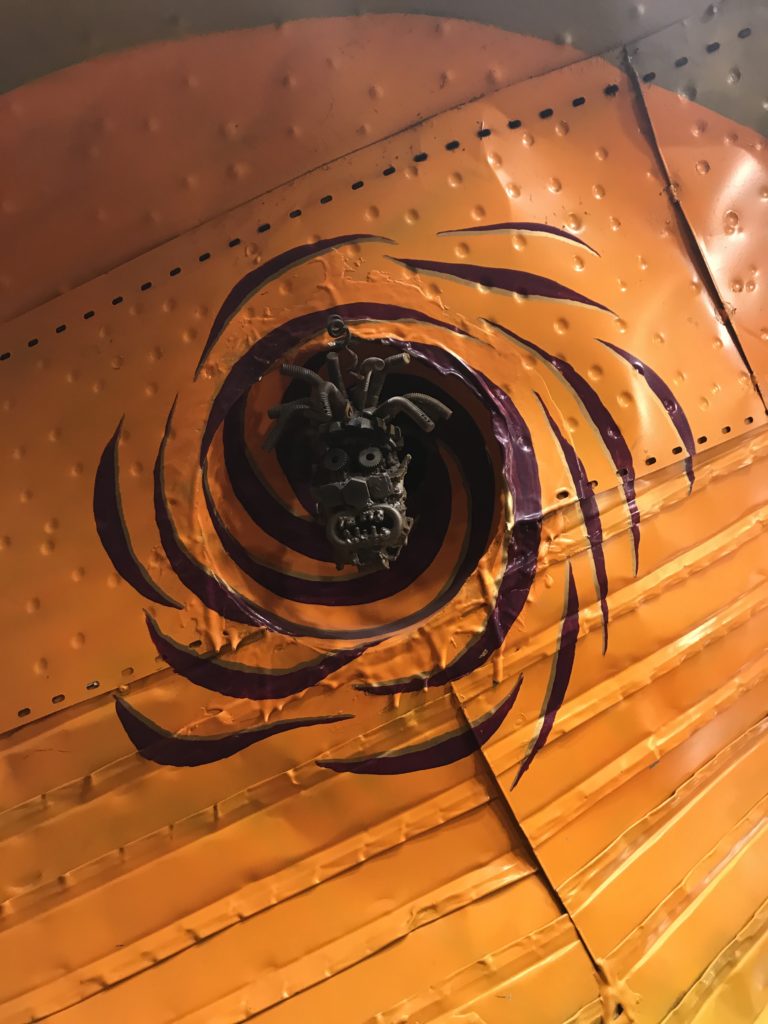 The elevator artwork was created in the early-1990s. Photo by Gabe Herman.

Veronis says there was no specific meaning behind the work except that the sculpture heads, which shake when the elevator moves, were based on real New Yorkers he encountered. The swirling paint may also have been a subconscious tribute to “The Wizard of Oz.”

Veronis says he has heard that some people view the elevator as walking into the “belly of the beast,” or that it is a character from “Transformers.” He likes people having their own interpretations of the art, and calls it is a “complimentary aspect.”

Swing says he loves that people are still coming to look at the elevator. “I think it’s wonderful. What could make you happier than people still like your work, searching it out?”