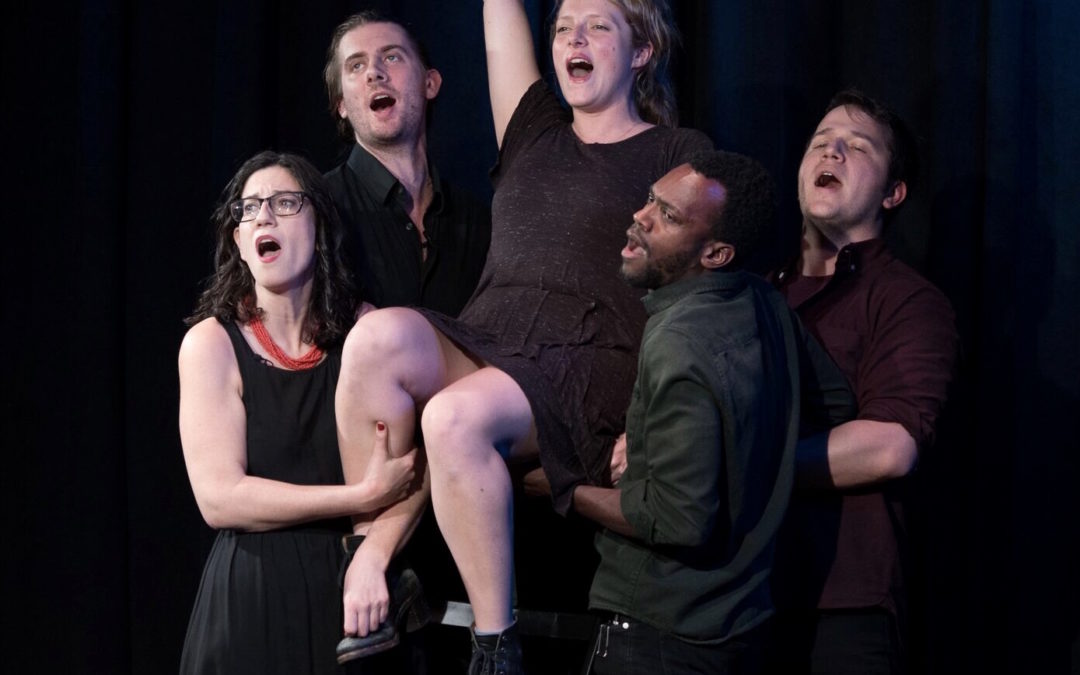 Sitting shoulder to shoulder in a small sticker-covered studio in Brooklyn, chairs wedged between amps and shelves and a drum kit, the players of hip hop improv comedy team North Coast have just broken out in chorus to the Reading Rainbow theme song.

The tune couldn’t be less fitting for the venue, and it’s amazing.

Throughout the rest of rehearsal, the group is unbothered by the rock music pounding in through the walls; they listen intently to each other’s suggestions as they talk through a hypothetical show improvising the life of LeVar Burton; no one misses a beat as their scenes change abruptly from the rapping ghost of Princess Diana to ad libbed rhymes about Shakespeare’s greatest hits.

Their name a riff on the longstanding rivalry between East Coast and West Coast hip hop, North Coast isn’t the only hip hop improv team in town, but they lay claim to being the longest standing, and one of the very best: any audience member of their weekly show at the People’s Improv Theater in Manhattan can attest to the latter.

Beyond the creation of “ANYBODY,” the group’s off-Broadway, fully improvised “historical hip hopera” in which a show is performed ala Hamilton around the suggestion of a historical figure from the audience, North Coast is distinctive for its existence within, and treatment of, the intersection of improvisational comedy and hip hop.

In this space, group founder James Robilatta, a 35-year-old white man, knows he is constantly toeing a line.

“Our biggest challenge is cultural appropriation,” said Robilatta, explaining with a laugh and a smile that he’s not one to shy away from hard topics. When he first started the group in 2009, he shared, it was entirely comprised of white men simply because that was who answered the call.

Today, he says, the pool of potential team members is larger, but still limited because the group requires equal skill in both improv comedy and freestyle rapping.

“We work very hard at being exceptional rappers, because we care about this. This is not just some gimmick,” Robilatta said, “But we know it’s also very important that the way we look onstage is representative of the community that brought this art form to life.”

Team member Katy Berry, 30, spoke along similar lines about the struggles she faces as a woman on the team, and as a woman in comedy in general.

“There’s definitely different standards,” said Berry, discussing barriers to entry and referencing the many times men have come up to her after shows with genuine surprise at her ability to “rap as good as the guys.”

“But it’s getting better,” she added, citing the group’s ongoing discussions about inclusion and diversity, and the general feeling of solidarity and empowerment among the women on the team to “lift each other up” and speak out against occasional misplaced misogyny in team raps.

Mike Poole, a 26, is one of the team’s newest recruits, and expressed admiration for the cohesiveness and professionalism of the team. Like much of the cast, Poole cited the immense amount of support and enthusiasm the team members have for each other on and off the stage as one of its defining characteristics.

“At the end of the day, we’re all going towards the same goal which is to be the best team possible,” said Poole, “And also to be representative of what we’re doing, the city we’re in, and the people that we’re performing for.”