All are welcome at Brooklyn’s Cambodian Temple 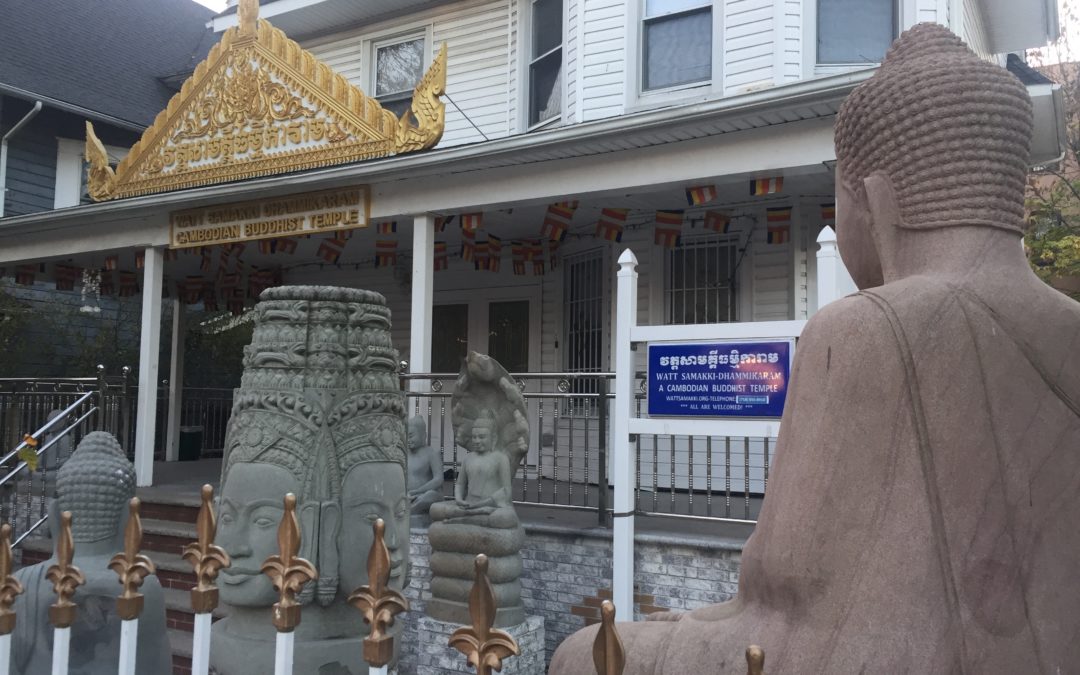 Just south of Prospect Park in Brooklyn, among spacious three-story homes on Marlborough Road, lies the borough’s only Cambodian Buddhist temple. Housed in what at first glance is just another stately old mansion, a sign reading “Watt Samakki-Dhammikaram, A Cambodian Buddhist Temple, All Are Welcomed!” tips you off.

Stepping up, you’ll find a flock of stone Buddhas and animal statues, an intricately crafted wooden mini-pagoda and an elaborate golden arch over its entrance.

Watt Samakki, founded in 1983, is one of only two Cambodian temples in the city, according to its website. The other, Wat Jotanaram in the Bronx, is considered a cousin. The house on most days is as unassuming as the other homes that occupy this otherwise quiet neighborhood. Inside, Cambodian monks in traditional orange robes preside over evening prayers in the midst of Buddhist statues and paintings. 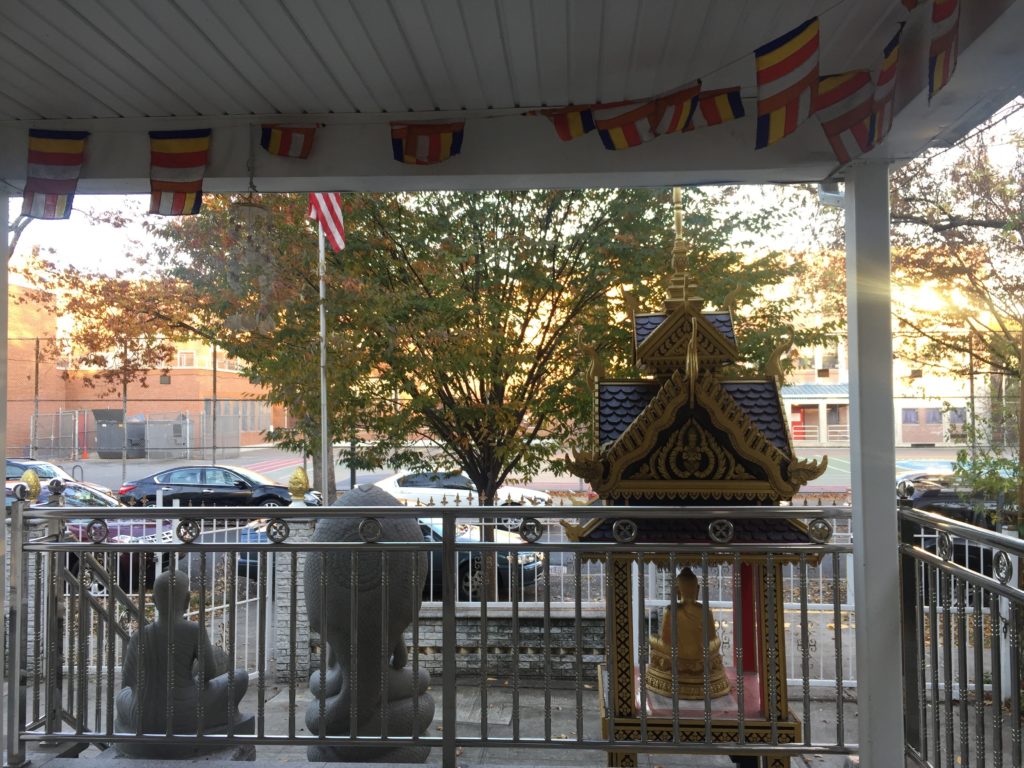 The temple sits adjacent to Prospect Park in a quiet corner of Brooklyn. By Molly Enking

Four or five times a year, the house- and even the surrounding block- is transformed for special occasions, such as the Cambodian New Year (mid-April) and Kathen, a Buddhist festival typically held at the end of the rainy season back home (mid-late October), for which they throw a parade. During each celebration, there is music, dancing, and more homemade dishes, from spring rolls and noodles to fish cakes, cold beef and spicy veggies. Every family brings a dish, and all are encouraged to attend.

“Everyone is welcome,” said Mean Mak, the chairman of the temple board. “People can come and meet the monks, they can accommodate you if you want to say prayers or learn more about Buddhism. And everyone is very welcome at our celebrations.”

“The Bronx people come down here because we have more food and more fun,” he added with a sly smile, referring to devotees at the other Cambodian temple.

Mak is good-natured and blunt, cracking jokes and speaking openly about the temple’s past and where he hopes its future lies. He’s been serving on the board since 2014, first as treasurer and now as chairman. In order to stay relevant and attract more younger Cambodians, he said, the temple has shifted somewhat from its religious roots.

“We invite people here to learn Cambodian dance, we have parties. This is a place for us to meet, to interact, to build community and celebrate our culture,” he said. “We’re not as religious anymore, more like a community center. But people can still come and pray and learn about Buddhism from the monks too.” 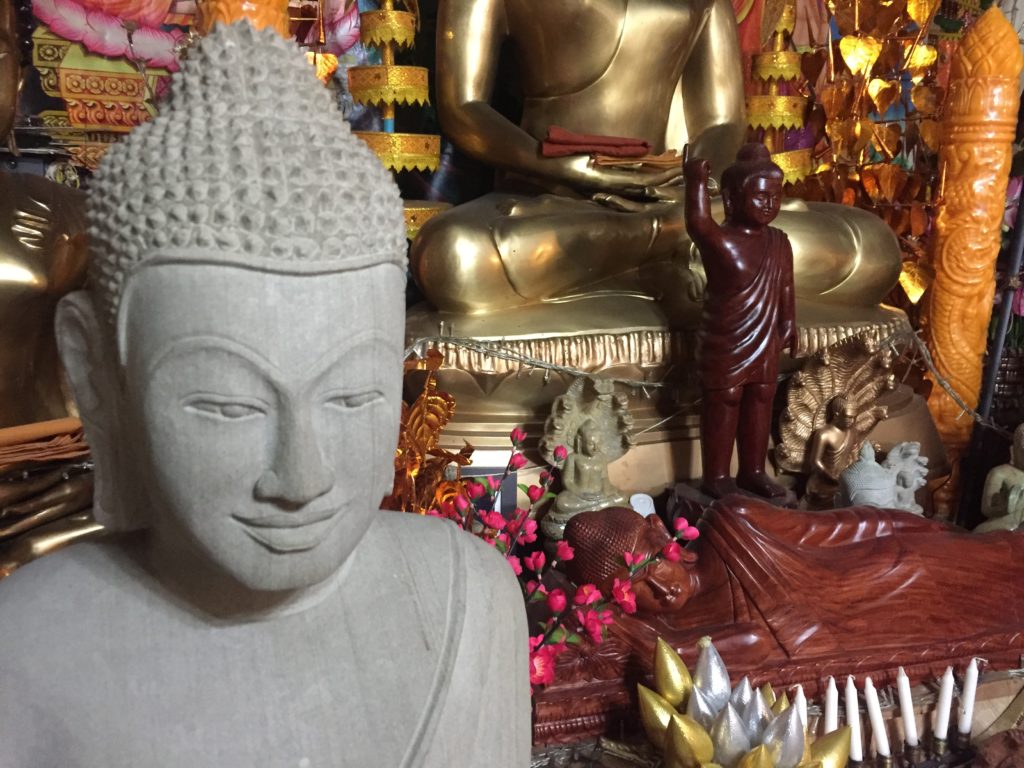 In the prayer room upstairs, golden buddhas share space with smaller ones made of stone or wood. By Molly Enking

For his recent revitalization efforts, Mak has managed to raise a little over $100,000 for the temple, an impressive feat considering a decline the Cambodian population in the area in recent years.

At the height of an immigration wave in the late 1970s and early 1980s, the number of Cambodian families steadily grew in Brooklyn, which was the center of the refugee community. However, in the 1990s, rent hikes and concerns about crime drove much of the population away, and many relocated to other Cambodian communities in Lowell, Massachusetts, and Long Beach, California, Mak said.

Only about 400 families remain in Brooklyn, while others scattered around the city and surrounding towns. Mak is now trying to keep the remaining families engaged with the temple and to bring in the next generation of leadership to the board.

On a cold Sunday afternoon in late November, the prayer service started at 4:30 p.m. The two monks in residence, Ven. Bunthoeun Thor and Ven. Bunsim Oung, came downstairs in traditional orange robes to greet visitors. An older couple joined them on the green- and red-flowered carpet in cross-legged or kneeling positions. Oung lit a few candles in front of the altar before kneeling on a cushion and beginning to chant rhythmically, in Khmer, and Thor chimed in.

The group sat facing the altar on the far end of the room. An outsized gold Buddha statue rests at the center and is surrounded by two other gold Buddhas and several other statues made of stone and wood. There are about a dozen votive candles, both large small, and bright red and magenta flowers, among other ritual offerings.

Prayers lasted for about 45 minutes. The monks chanted with the company of the older couple at times. Oung speaks little English, but he said they would like to lead prayers at the same time every day, and all are welcome. 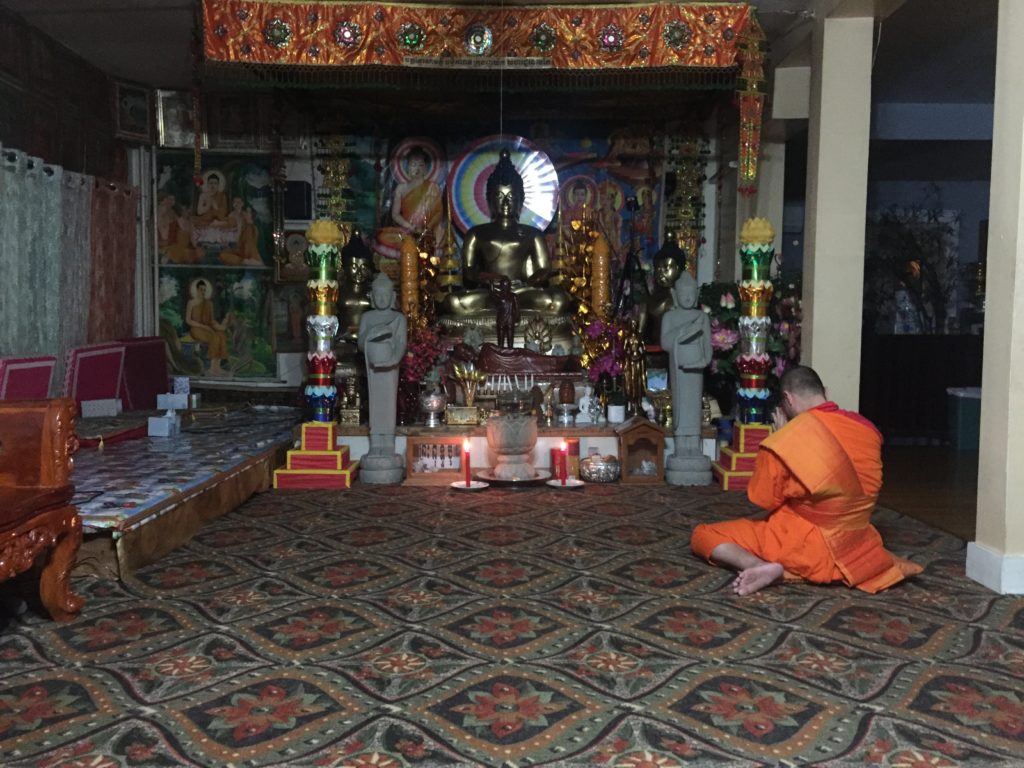 The temple has two monks in residence who preside daily prayer services. By Molly Enking

On Dec. 17, Watt Samakki will throw a party to celebrate Bangsokol: A Requiem for Cambodia, a multimedia music and dance piece with a limited run at BAM in Downtown Brooklyn on Dec. 15 and 16. The small Brooklyn community at Watt Samakki will host Cambodian dancers and artists as well as the Bronx Cambodian community with food and music.